No one really knows when the first blank T-shirt was scribbled upon or artistically produced in one or more quantities, but t-shirt popularity as outerwear was on the move long before professional athletic teams, corporations, and rock bands saw them as customized billboard advertisement vehicles.

THE HISTORY OF T-SHIRTS

History reveals that the modern t-shirts of today may have been descendants of the ancient Egyptian Tunic.

It appears that the Egyptian Tunic has characteristics akin to our modern-day t-shirt, and may in its earlier form been used by Egyptian farmers, or fellaheen, hundreds of years before the First Dynasty.

With over 2000 tombs Tarkhan is one of the most important cemeteries from the time of state formation (about 3000 BC) in Egypt. It was from this site that one of the first ancient Egyptian Tunics was discovered. 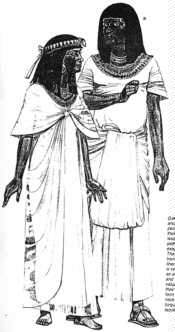 Due to the heat..  many ancient Egyptians wore no clothes at all.

Clothing that was worn, were pieces that were very thin and light and made out of flax which had been turned into linen.

Unlike the Greeks or other people that lived in the Mediterranean, the people in Egypt did not wear just one or two big pieces of cloth wrapped around themselves in various ways.   Instead, both men and women wore tunics that were hand sewn to fit their bodies.

These tunics were like a long T-shirt of today, which reached to the knees (for men) or to the ankles (for women). 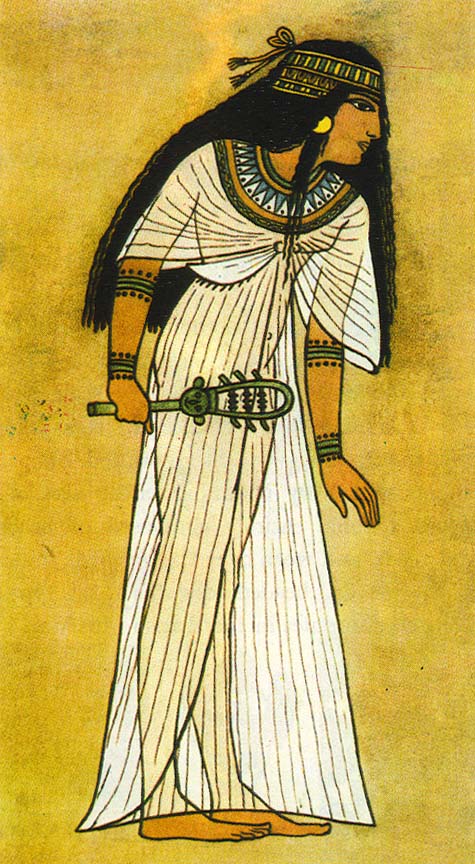 When not topless, Egypt men wore short capes, similar to but simpler than the ancient Greek chlamys.

Low-status men and slaves wore loincloths or wrapped skirts sometimes called schents or skents. Foot soldiers also wore short skirts, corselets and little else. These skirts were often pleated, apparently by pressing the cloth into a grooved board, the pleats held by starching the fabric.

The length and style of the skirt worn to tell the viewer not only much about the wearer but also about the period when the person lived. Early men’s skirts were knee-length or shorter and fitted closely to the hips. Skirts lengthened during the Middle Kingdom period. 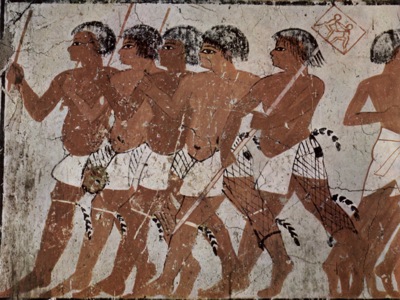 Experts say that the T-shirt first came to the USA during the WWI period after the US Military noticed how the light cotton undershirts worn by European soldiers were so effective.

Marlon Brando,  James Dean,  John Wayne, and  Elvis Presley may have helped to make the T-shirt-as-outerwear manly and sexy by wearing their “T-shirts” on stage.

However, more credit may be given that..  the true popularity surge of the t-shirt can be gifted to the pop art created by the baby boomers and famously labeled hippies of the ’60s

White*-Cotton “blank” T-shirts to help one express love and flower power became one of the best, and cheapest, forms of fashion-forward comfort clothing to design, dye, wear, and show.